The Baileigh PL-1640 Precision Lathe delivers precision manufacturing to turning operations. The whopping 7.5 horsepower engine delivers over 30-amps of power to take on even the most rigorous of metalworking operations. The 3-chuck jaw provides a more durable, secure holding experience to aid in the precision and accuracy.

Baileigh is another of the major brands owned by JPW Inc.

They also own Promac, Edwards, Wilton, and Powermatic, among others. Collectively, JPW’s brands have over 400 years of heritage and branding behind them.

Baileigh products are made in manufacturing plants around the globe.

There are factories currently in the United Sates, Italy, Portugal, the Netherlands, Germany, Taiwan, China, and Poland.

Key Specifications of the Baileigh PL-1640 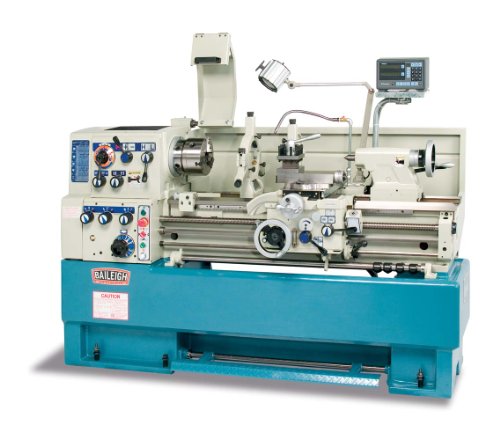 Up to 12 speeds are available to be selected, ranging from a user-safe 30 RPM all the way up to 2000 RPM in total.

Older lathes use a simple marking system, but the Baileigh PL-1640 Precision Lathe and its digital readout make it easier than ever to get the precise speed desired.

The flood coolant system allows the machine to last much longer. Keeps cutting tool from breaking down sooner rather than later and improves safety as well.

The collar system also comes built-in to allow for the fit of larger diameters than some of the other lathes on the market.

Top Features to Look For

The Baileigh PL-1640 Precision Metal Lathe is certainly not lacking in features.

There are almost too many to list, but the idea is to deliver greater accuracy and improved precision for industrial-grade parts that demand greater detail.

The Baileigh PL-1640 Precision Lathe is one of the most powerful on the market, delivering over 30 amps of power thanks to the 7.5 HP motor.

This allows the user to also get greater accuracy out of the variable speed selection, with 12 different choices available.

Older lathes will have a readout system that makes it difficult to get truly accurate readings on RPM.

The Baileigh PL-1640 Precision Lathe comes with a digital readout system that makes it easier to get precise cuts.

When it comes to the manufacturing of ultra-precise products, there may be none better than the Baileigh PL-1640 Precision Lathe.

If that weren’t enough, the Baileigh PL-1640 Precision Lathe comes standard with plenty of features.

A 3-jaw chuck, headstock chuck guard (with an automatic safety switch), an emergency foot brake, and a halogen work light all make the Baileigh PL-1640 Precision Lathe a safer machine than others on the market.

When it comes to power output, it is tough to beat the Baileigh PL-1640 Precision Lathe.

The 7.5hp motor delivers over 30-amps of power, allowing for the turning of even the toughest of metal materials.

Despite all of that power, precision adjustment is possible through the dozen different variable speeds.

The Baileigh PL-1640 Precision Lathe is definitely not for amateurs. Despite this, there are a wide array of settings that are easy to implement.

That and the digital readout system make it easier than ever to get the most precise speed and cutting possible for optimal efficiency.

Ease of Maintenance, Repairs, and Warranty

Clean up is relatively easy thanks to the quick-connect air hose function. Easy to blow away metal chips and debris to prevent build up within the machine.

Cutting tools should be changed once a year or so (probably more often in industrial settings) to ensure that the tool does not dull to the point that material becomes damaged.

Likewise, coolant needs to be changed out to ensure that it stays properly functional.

Baileigh offers a one-year limited warranty that covers the replacement of any parts on the Baileigh PL-1640 Precision Lathe.

Not only that, Baileigh offers lifetime technical support as well as advice from their team of specialists.

For more information on Baileigh’s warranty program as well as their list of available parts, check out their support page.

The price of the Baileigh PL-1640 Precision Lathe is well over $20,000, making it one of the more expensive options for lathes on the market.

This is due to the plethora of features that come standard on the machine as well as its capability for producing highly-precise turning operations.

Industrial shop owners felt that this unit was on the pricey side but that it was ultimately justified due to the level of precision and accuracy that is delivered with each turning operation.

Pros and cons of the Baileigh PL-1640

Here are some of the pros and cons of the Baileigh PL-1640 :

With higher power outputs, speed control, and precision controls for improved accuracy, it is a must for industrial machine shops.

While the price tag can be a bit off-putting, it is hard to top the level of precision and accuracy that the Baileigh PL-1640 Precision Lathe delivers. Machine shop owners will be able to turn out the most precise and accurate parts possible.

Sharon loves to work on power tools and provides handyman services. She is an expert with both wood and metalwork. When free, she loves to hear country music and spend time with her cats.