The Nova Galaxi DVR 1644 Lathe brings the power with nearly 14-amps and 115-volts of energy in its motor. Even more impressive is that it can achieve variable speeds of up to 5,000 RPM for maximum precision and power alike. Perfect for just about any woodworking operation thanks to 44-inches between centers.

The Nova line of lathes belongs to Teknatool International.

They are a global manufacturing company that has been in business for 30 years (originating in 1980). They have facilities located across the globe, primarily in New Zealand, the United States, and China.

What makes Teknatool International unique is that it is a large company that is still family owned and operated.

They have a passion for developing emerging and new technologies while improving on each of their manufactured power tools. 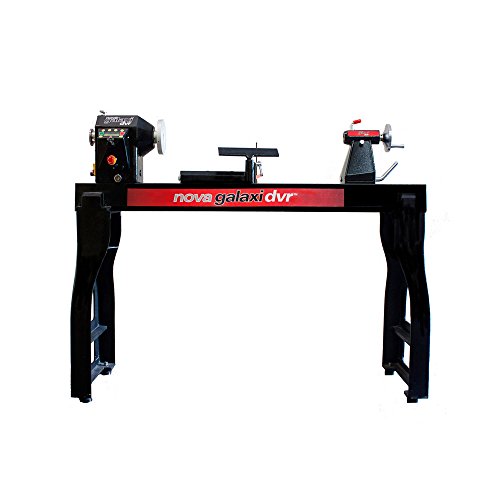 If you want more power out of your lathe, the Nova Galaxi DVR 1644 Lathe will deliver. It offers 2HP (almost 14-amps) of power for greater torque than just about any comparable lathe on the market right now.

Even better, it offers up to 8 different speeds in addition to a dial in speed control.

Able to achieve speeds up to 5,000 RPM, users can get quicker, more precise settings when choosing the right speed for the job. This can allow for time saved on a variety of projects.

The Nova Galaxi DVR 1644 Lathe is built to last thanks to the cast iron design.

With improved structural strength and the ability to add custom shelving to the stand, this unit can provide a sturdy, reliable place to store tools while getting regular use out of the cutting tools.

Top Features to Look For

The Nova Galaxi DVR 1644 Lathe is a fantastic piece of woodworking equipment that can bring superior power, speed control, and precision to a woodworking setting.

Great for smaller shops, the Nova Galaxi DVR 1644 Lathe can provide better, more efficient power than some of the larger options on the market.

Changing direction has never been easier. The outboard has an expandable capacity up to 29 inches and even has an optional outrigger accessory.

And with 44-inches between centers, the Nova Galaxi DVR 1644 Lathe is capable of taking on most standard woodworking operations.

You don’t need to purchase a large industrial lathe to get all the power you could need.

The Nova Galaxi DVR 1644 Lathe has nearly 2HP of power, providing 14-amps of torque; more than just about any competitive lathe of the same size on the market currently.

The Nova Galaxi DVR 1644 Lathe can also achieve up to 5,000 RPM of speed across 8 variable speed settings.

With a dial in speed control, users can program in their speed with quickness and efficiency for the optimal job setup.

What’s not to like about the power delivered by the Nova Galaxi DVR 1644 Lathe ?

It brings nearly 14-amps of power to the table, providing a greater overall level of power and torque than most other 16” lathes on the market currently.

All of this allows for greater precision on even the most heavy-duty of turning operations.

While the power is certainly a calling card for the Nova Galaxi DVR 1644 Lathe, it is the improved ease of use that really makes it stand out.

The dial in speed control in particular makes it easier for users to set their speed and go, getting the job done more efficiently.

Ease of Maintenance, Repairs, and Warranty

Proper clean up is the best way to maintain the Nova Galaxi DVR 1644 Lathe.

Several components can be removed for a more thorough clean and a quick shop vac will leave it ready for the next task.

As is the case with most lathes, replacing the cutting tools, the center, and other removable components once a year is recommended to uphold the integrity of the lathe.

Teknatool International offers a limited five-year warranty on each of their lathes. Within that warranty is two-year coverage on the motor for the lathe specifically.

The warranty is in place to cover any material or workmanship defects that may occur during the manufacturing of the product.

If you have any further questions, check out Teknatool’s warranty page for any additional answers.

Compared to other lathes of a similar size on the market, the Nova Galaxi DVR 1644 Lathe is very reasonably priced.

It is relatively affordable for smaller shops that are looking for greater precision and power out of a smaller lathe.

Most customers were pleased with the price point feeling that it delivers superior performance, particularly when compared to larger more expensive lathe options.

Pros and cons of the Nova Galaxi DVR 1644 Lathe

Here are some of the pros and cons of the Nova Galaxi DVR 1644 Lathe :

Small shops that are looking to get superior power and performance out of their lathes need look no further than the Nova Galaxi DVR 1644 Lathe.

Combined with the dial in speed control, users can get improved efficiency out of this unit for faster job completion.

It’s hard to not like the Nova Galaxi DVR 1644 Lathe. While some other smaller lathes sacrifice power for size, this unit delivers the muscle.

It is built to last and to make jobs quicker and more efficient from the setup through completion.

Kevin is an expert metal worker with a passion for designing and making. He is passionate about his power tools. He contributes his ideas to various online platforms.